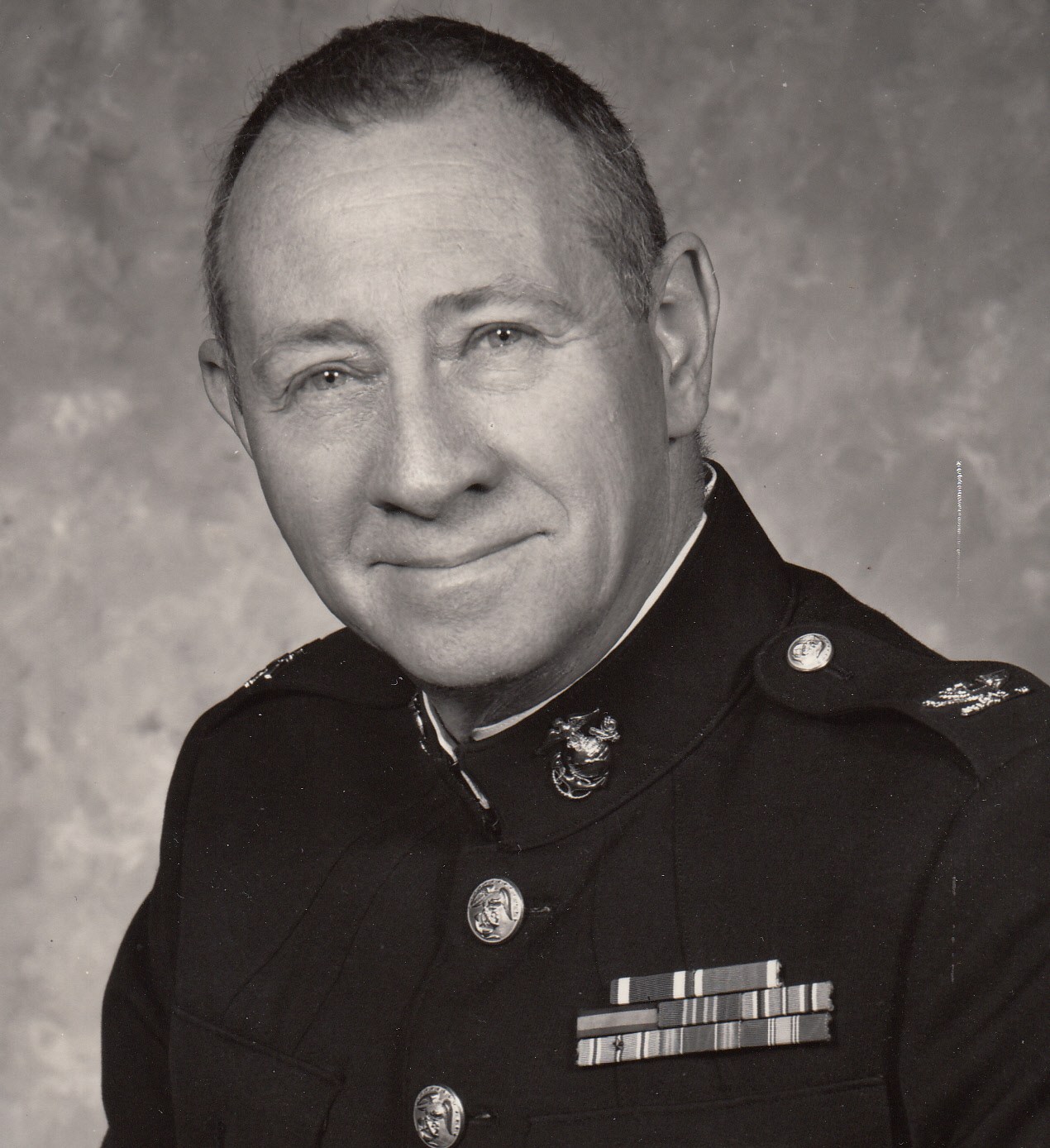 Charles H. Waterhouse was an American painter, illustrator, and sculptor renowned for using United States Marine Corps historical themes as the motif for his works.  Throughout his career, he created over 500 pieces for the Marine Corps Art Collection.

Waterhouse enlisted in the Marine Corps in 1943 and was on the first wave landing on Iwo Jima with the 5th Marine Division.  During the battle, he was severely wounded but fortunately continued to have a remarkable career as an artist.

After the war, Waterhouse formally studied art.  Upon graduating in 1950, Waterhouse became a sought-after illustrator, with his work appearing in hundreds of books, magazines, and publications. In 1966, the Society of Illustrators began sending artists to Vietnam and Waterhouse volunteered.

His research was always meticulous as to accuracy of detail.  He had a penchant for horses and dogs in his works. Whenever possible and appropriate, he would add animals to his works (as seen in several of his paintings in the MCRD Museum Art Gallery).

In 1971 Waterhouse received a commission as a major in the reserves to create 14 salon-size paintings depicting the Marines in the Revolution for the U.S. Bicentennial that was approaching. The Marine Corps wanted an artist whose forte was historical accuracy.  He became the “Artist in Residence” for the Marine Corps Historical Division.  His paintings about Marines were of the highest quality and whenever Headquarters Marine Corps needed an important specific pictorial assignment, they called on him.  His final contribution for the Marines in Revolution was 14 major paintings, 70 finished drawings, and four smaller paintings which rounded out the collection.

He served in the Marines for a total of 21 years of service which included his time during WWII.

Waterhouse’s work can be seen in museums, federal buildings, and historical sites around the country. The paintings featured in the MCRD Museum’s Art Gallery are from the series, “Marines in the Conquest of California,” and are on loan from the National Museum of the Marine Corps.

Ray Lebron is a Marine Corps veteran and a docent at the MCRD Command Museum. He is an active volunteer in his community and enjoys educating others about Marine Corps History.

Sea duty is in the DNA of every Marine who has ever served in the Corps.

It became a major part of mine when I graduated from Sea School, MCRD San Diego, September 1971.

The Continental Marines were established on Nov 10, 1775, by a resolution of the 2nd Continental Congress. It stressed “that particular care be taken, that no persons be appointed to office, or enlisted into said Battalions, but such are as good seamen, or so acquainted with maritime affairs as to be able to serve to advantage by sea when required.”

MARDET Marines, all 03s, were usually young, “non-salty” types. Appearance, fitness, and a generally tough appearance are desired traits when you represent the Marine Corps. Navy ships make port calls all over the world and we could be the first and only Marines the locals would ever see, not counting John Wayne. Uniform inspection began every day; look less than perfect, and no breakfast for you. Spit shined, polished, and squared away, superior performance in inspections was demanded. Dress Blues were fitted and free.

At Sea School we trained in a variety of MARDET duties: rifle, pistol, and naval gunfire. Ships with naval guns always had one gun manned by Marines. (The guns we used are now northwest of the Headquarters building at the intersection leading to the Bayview Restaurant on the Depot.) We enforced ship discipline and manned the brig. Marine orderlies provided security for flag officers, their living quarters, and their communications. Orderlies had Top Secret clearance, necessary to perform duty in Flag Country.

Shipboard fire training was expanded to include damage control after the 1973 USS Forrestal disaster. Firefighting/damage control school was at the 32nd St Naval Station, where instructors set tanks of bunker oil afire, sending black smoke and flames high into the sky. We put the fires out using naval firefighting equipment. Special hose nozzles sprayed water in front of you to create a cool and safe zone, allowing approach and suppression of the inferno. We spent a few days learning to navigate the interior of the USS Coral Sea, not an easy thing to do. We learned naval terminology, port from starboard, etc.

Marine sentries guarding the SASS locker (Special Ammunition Storage Space, nukes) were authorized to use lethal force 24/7, the only post in the Marine Corps so authorized. Sentries were armed with M1911 sidearms and completely filled the door access to SASS. No one was allowed to approach without proper ID and their name on the access list. The mat in front of the guard post, crimson with the EGA prominently displayed, trimmed in gold, created the boundary beyond which none could enter without authorization. Any unauthorized sailor that stepped on the gold trim was warned, if he continued onto the crimson we were trained to engage. That never happened.

Chow lines aboard ships can be quite long, but anyone “on duty” got to cut in front and be fed immediately. All it took to be “on duty” was a duty belt, and we all had one of those…

Brett Dingerson has been a docent at the MCRD Command Museum for 11 years and a volunteer on the USS Midway Museum for 4 years. He is a Kansas native and attended the United States Military Academy at West Point. He served as an active duty Marine from 1971-1975 as an 0311. After graduating from Sea School, he served with the Marine Detachment at Commander in Chief Pacific, Camp Smith Hawaii, under Admiral John S. McCain, Jr.